Sudoku is played on a grid that consist of 9x9 spaces arranged in 9 rows (placed horizontally) and 9 columns (placed vertically) grouped into squares with 3x3 size.

Every row, column and square (9 spaces each) must be filled with numbers from 1 to 9, without duplicating a number on the same row, column or square. There is only one condition – Every row, every column and each of the little squares in size 3x3, after the filling must contain all numbers from 1 to 9. Moreover each number can be present once in a given row, column or square.

Within a row, column or square from the grid, each number must appear only once in it.

Do not repeat any numbers 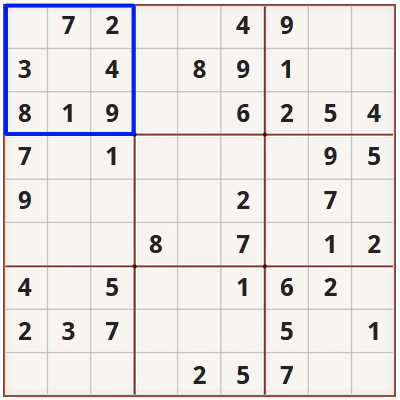 As you can see in the upper left square (marked with blue) there are already filled 7 from 9 spaces. The only numbers missing in this square are 5 and 6. When we trace which numbers are missing from the square, row or column, we can exclude or use deduction to find out which number we should place in the empty fields.

Do not try to guess

Sudoku is a logically based game, that’s why guessing won’t help. If you don’t know which numbers you have to place in particular space, keep checking the other parts of the grid until you see the opportunity to place a number. No need to rush- Sudoku is based on patience, inspiration and recognition of the patterns.

Use the process of exclusion

What does it mean “process of exclusion” while playing Sudoku? Here’s an example. In the Sudoku grid (shown below), in the left vertical column (marked with blue) are missing few numbers: 1, 5 and 6.

One of the ways to find out what number in which column to place using the ”process of exclusion” when you check the numbers that are already included in every square - because there can’t be duplicated numbers in a square, row or column. In that case you can easily notice that number 1 is found in the upper left square and in the upper middle square (the numbers circled in red). This means that there’s only one place where you can put number 1 - in the square marked in green.  Thus the “process of exclusion” in Sudoku works – look carefully which spaces are clear, which numbers are missing and then by deduction, based on the positions of the numbers in the grid, you can find which numbers you must place.

The Sudoku rules are not difficult in general, but the game has endless options with millions of combinations and a wide variety of difficult levels. All of this is based on simple principles using the numbers from 1 to 9, where you have to fill the empty spaces, using logical thinking and the numbers shouldn’t be repeated in the same square, row or column.